It was in November this year that we heard from Dave Williams of the Peak District Mines Historical Society, to say that the Society had recently taken on responsibility for the papers of the historian, artist and writer Nellie Kirkham (1896-1979).  Dave, and other active members of PDMHS, were anxious to find a permanent home for the papers, lest the information contained in Kirkham’s research notes be lost to future generations.

Dave brought in box-files, folders, and index cards at regular intervals over subsequent weeks.  The final lot of material came in metal trays that had been removed from a filing cabinet: 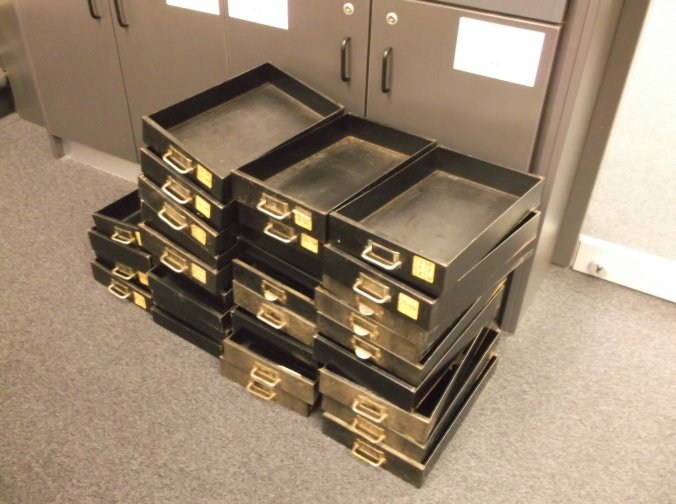 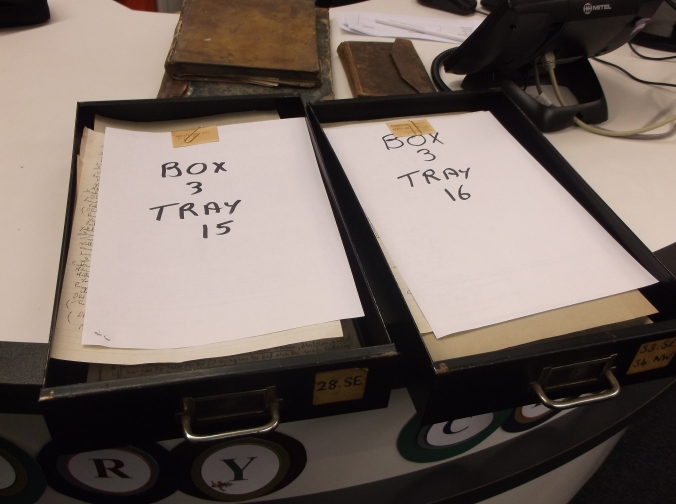 I then began the process of transferring the papers to our own folders.  I shouldn’t really have used the acid-free folders until the papers had gone through our quarantine procedures, but they were all I could lay hands on at the time!  They may well be replaced by custom-built packages later on.  Here’s Dave standing next to some of the last batch of material:

When we accept collections of personal papers, we like to furnish the catalogue with basic biographical information in the Administrative History section, so I have done a bit of digging.  I started out with an obituary penned by Douglas Nash for the October 1979 issue of the PDMHS Bulletin.  I recommend following the link embedded in the previous sentence if you want to know more about her working life – but be warned that the date of publication appears on the top of the page as October 1978, when it should say 1979.  Note the assertion that some of Nellie Kirkham’s best stuff never made it into print: this is precisely why the archive is so valuable – although how easy it will be to retrieve information from it remains to be seen!  Her published output also was very considerable: if you look for Nellie Kirkham’s works on Amazon, you will find a large number of titles – but most of them out of print.  Happily, however, there is a large number of Nellie Kirkham books on the library catalogue, which makes them very accessible.

Mr Nash also makes mention of Nellie Kirkham’s work as an artist and illustrator in the 1920s.  If you want to see some examples of her artistic works, you can see them on the Bonhams website, from an old auction catalogue.  They are rather lovely, and very evocative of their time.

The obit gives Nellie’s married name as Mrs J H D Myatt, although she always published under her maiden name.  I found on www.freebmd.org.uk that a marriage between Nellie Kirkham and James H D Myatt was registered in the Stoke-on-Trent district in the second quarter of 1928.   Registration indexes also show that there was a James Harold Douglas Myatt, who was born on 9 December 1889 in the Stoke-on-Trent district, and whose death was registered in the same place in the first quarter of 1980.  On the 1911 census he appears as a 21-year old dental assistant, living with his parents on London Road in Stoke.  If anyone believes this to be the wrong J H D Myatt, please let me know!

The PDMHS obituary gives Nellie Kirkham’s date of death as 28 May 1979, from which I was able to find the relevant entry on the death index, which gives her date of birth as 28 August 1897.  However, her birth was actually registered in the final quarter of 1896, in the Stoke-on-Trent district.  (I’m grateful to Joan Fleet for spotting this: it’s an entry that does not reveal itself on Freebmd but does show up on Ancestry.)

The 1901 census shows only one really decent match for her, and that’s Nellie Kirkham, daughter of earthenware manufacturer Harold G. Kirkham and his wife Agnes, who lived at “Gladwyn”, Minton Place, Stoke.  It may be pure coincidence, but I note that the family had a servant by the name of Myatt!  The family is at the same address on the 1911 census.  One feature of this census which proves very useful to historians is that married couples were asked how many children they had ever had, and how many of those were still living.   In the case of the Kirkham household, we can see that they had only ever had two children, so Nellie’s only sibling was her sister Daphne.   Nellie herself was not at home on census night, but there is a Nellie Kirkham of the right age and birthplace at Queenwood Ladies’ College in Eastbourne.  Until December 2018, the list of notable former pupils to be found on Wikipedia included but one name, that of the actor Martita Hunt (1900-1969).  Hunt was not a contemporary of Kirkham, and can’t have stayed at Queenwood for long, as she apparently only arrived at the age of 20 – whereas on census night in 1911, the oldest pupil was 19.  Since the original edition of this blog post, John Page has added the name of Nellie Kirkham to the Wikipedia page, for which we are grateful.

We already had a small Nellie Kirkham collection (D5675), which we accepted in 2002, so I arranged to allocate the same collection reference number to the incoming material.  I noticed that D5675 was unlisted, so added some rudimentary details to the catalogue – it comprised a bundle of her handwritten poems.  This leads me on to two final points:

New online exhibition available on our website featuring original archives relating to Derbyshire’s women, and heroines, including Florence Nightingale and Joan Waste. Let us know what you think http://bit.ly/oz15DW