We are now two years away from the bicentenary of the Pentrich Revolution.  Want to know more? Then follow this link to the National Archives’ blog

On this day 200 years ago, Mount Tambora, on the Indonesian island of Sumbawa, erupted.  The volcanic eruption on 10 April 1815 was one of the most powerful in recorded history and you can see a dramatic photograph of the crater left at the summit in this NASA image here: Mount Tambora.

So you may wonder what this has to do with Derbyshire… Well, the repercussions of the eruption were felt all around the world and we can see the evidence of its impact here in the archives.  Why?  Because the eruption sent volcanic ash and sulphur into the stratosphere, which obscured the sun and reflected its rays, cooling the earth’s climate and resulting in Europe and North America experiencing the ‘Year without a summer’ in 1816.  We can see how this affected the people of Derbyshire because Sir Henry Fitzherbert of Tissington Hall wrote a fascinating account of the year in his notebook. 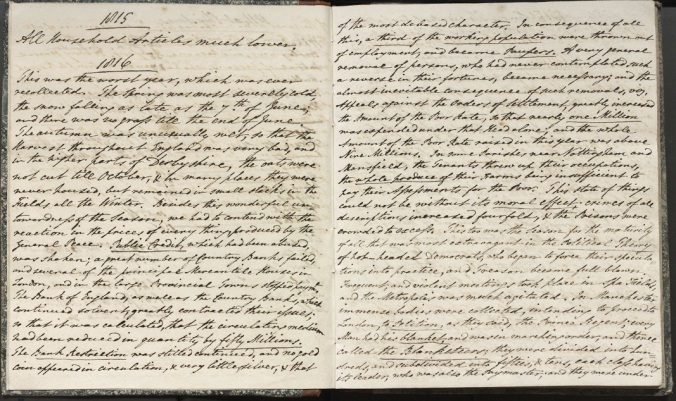 Of the weather he says:

“The spring was most severely cold, the snow falling as late as the 7th of June; and there was no grass till the end of June.”

Sir Henry also used his notebook to record annual prices of basic commodities.  And analysis of his figures shows how the bad weather affected harvests, causing food prices to go up drastically (except, for some reason, malt and cheese!):

The rocketing cost of living led to many people falling into poverty (Sir Henry says a third of the population became paupers), which meant that the parishes, who gave relief to the poor, struggled to cope.

We can see some corroboration of this in the Quarter Sessions records.  There were strict criteria setting out who could receive relief from the parish, and parishes would apply to the Quarter Sessions for a removal order to move paupers on to another parish. We have a handy database of removal orders (do ask us to check the database if you’re looking for an ancestor who might have become a pauper) from which I’ve extracted the numbers of orders for each year.  Take a look at the increase in the number of removal orders before and after the eruption:

Poverty and food prices led to social unrest across the country (Sir Henry again provides helpful details), but the biggest uprising happened here in Derbyshire.  On 9 June 1817, the Pentrich Revolution (also known as the Pentrich Rising or Pentrich Rebellion) took place, as armed men marched on Nottingham in the first stage of an attempt to bring about government reform.  The revolution was easily thwarted by troops who were awaiting the marchers at Giltbrook; indeed the revolution seems to have been largely instigated by a government spy, acting as an agent provocateur.   Jeremiah Brandreth, and two other conspirators, William Turner and Isaac Ludlum, were subsequently hanged and then beheaded as a warning to others.

You can read a transcript of Sir Henry’s diary here: D239 M F 10229 pp 4-7 transcription.  The Pentrich & South Wingfield Revolution Group are developing plans to commemorate the Pentrich Revolution’s 200th anniversary in 2017, but it’s sobering to reflect that it may never have happened if not for a volcano that erupted 7000 miles away…