As not all of us who are currently working from home can carry on with our ‘normal’ job (repairing documents requires access to the conservation studio), I have found myself copying old typed lists into spreadsheets, so they can be imported into our online catalogue. The archive of the Dakeyne family of Darley Dale (D9) was a joy to work on: it was one of the first collections to be deposited with the county council, way back in 1922 when the Record Office didn’t even exist yet!

The archive mainly relates to Daniel Dakeyne, who was born on 29 April 1763 and lived at Holt House in Darley Dale until his death in 1806, aged 43. He was a lawyer, banker and an antiquary, who amassed a great deal of documents and information intending to write a topographical and genealogical history of Derbyshire. This ambition was never realised, but he has left us with fascinating glimpses into how genealogical research was carried out in the 18th century. For instance, on the 20 November 1792 he writes:

Fortunately he had no trouble in finding a suitable friend: 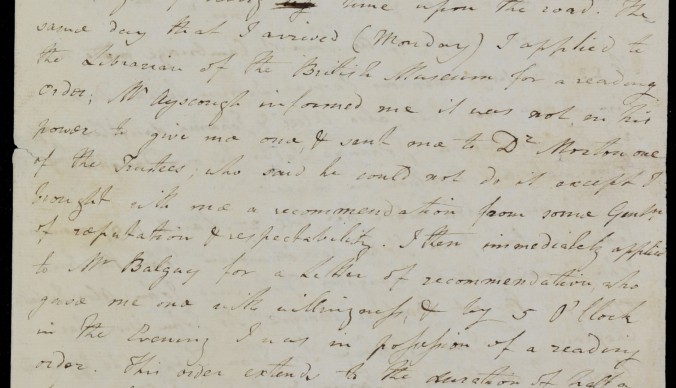 He even tells us when the British Museum opening hours were:

“…the time of reading is five days a week from 11 o’clock in the forenoon till 3 in the after.”

Researchers in the 18th century clearly faced similar problems to their modern counterparts, whether it be reading old handwriting…

…or the expense of getting access to collections, in this case the Duchy of Lancaster:

“…the most minute research is charged 10/6 which must for every opening of a book be repeated…” (That’s £41 in today’s money!)

There is also every researcher’s greatest fear, written in a PS on a letter from 1792:

“Preserve this letter lest I should lose my notes by any accident.”

Dakeyne didn’t do all his research himself – he had some help from Samuel Ayscough (possibly the same Librarian of the British Museum?), who showed his appreciation for an unusual form of payment in 1794:

“A pheasant & a brace of remarkably fine hares is a reward by far greater than any little assistances or civilities I may have showed to you could merit.”

And all of us at the Record Office echo Ayscough’s sentiments that:

“To render the researches of others more easy, was it not part of the duty of my situation, I should find it my inclination…”

The original typed list from the 1960’s has now been copied into a spreadsheet and all the extra detail about the collection will appear on our online catalogue soon.

If one of your resolutions this year is to find out more about the family tree, but you were putting it off because you weren’t sure where to start, come along to Derbyshire Record Office to hear family history researcher Kate Henderson as she shares hints, tips, and some odd and unusual findings from over thirty years of research.

Tickets are obtainable from Derbyshire Record Office, £3 (£2 concessionary), or call 01629 538347 to book, or email on record.office@derbyshire.gov.uk

We look forward to seeing you