Many people aren’t aware that Florence Nightingale, world famous as the founder of modern nursing, came from a Derbyshire family.  Although mostly associated in popular imagination with the Crimea, of course, and London (where she died), Florence came from the Nightingale family of Lea, near Matlock, and retained strong connections with her family home and the people of Lea.

Florence’s links with Derbyshire are explored in a University of Nottingham project, which has just acquired a new website:  Florence Nightingale comes home for 2020 .

On this site you can find out more about the project itself, as well as what researchers have discovered so far about Florence and Derbyshire.  There are all sorts of other resources too, including local history trails you can follow, and you can even take a virtual tour around the Nightingales’ home at Lea Hurst!

The project will be going on until 2020, which would have been Florence’s 200th birthday, and you can keep up with their activities and findings by signing up to their newsletter and following the project blog.

Florence Nightingale’s signature, from a letter at Derbyshire Record Office.

Derbyshire Record Office is working closely with the team at Nottingham, and you can also get involved.  The project team are keen to make contact with people who have a research interest in the Nightingales.  If that sounds like you, then you could become involved in the project as a Citizen Researcher.  You don’t need to be an academic, so if you’d like to be involved, they would love to hear from you.

Did you know that in a couple of years it will be 200 years since Florence Nightingale was born?  Many people aren’t aware that Florence’s family was from Derbyshire, but to link with her anniversary, the University of Nottingham has a major Arts and Humanities Research Council funded project called Florence Nightingale comes home for 2020.

One of the researchers on this project, Dr Richard Bates, has been here at the Record Office looking through the records of the Nightingale family and was particularly interested by item D4126/1, snappily titled “Schedule of the Title deeds and Particulars of the Estates of Wm Ed Nightingale, Esq, in Lea, Holloway, Wakebridge, Matlock, Wensley &c &c in the County of Derby” 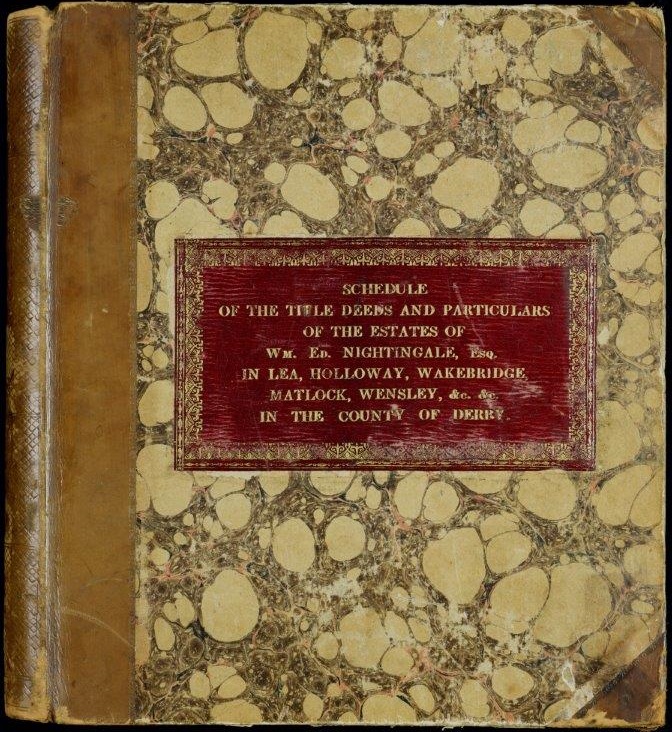 This volume, dated 1825, was produced either by, or for, William Edward Nightingale (born William Shore), Florence’s father. It was most likely drawn up in the early 1820s. In 1815, William had assumed possession of a considerable estate of land, bestowed on him in the will of the eccentric Derbyshire industrialist Peter Nightingale, his uncle, who had died in 1803. However William, who had to change his name to Nightingale as a condition of taking the inheritance, only came to live in Derbyshire in 1821, having spent the initial years of his married life travelling in Europe, especially Italy. His daughters were named Parthenope, the Greek name for Naples, and Florence, after the cities in which they were born. 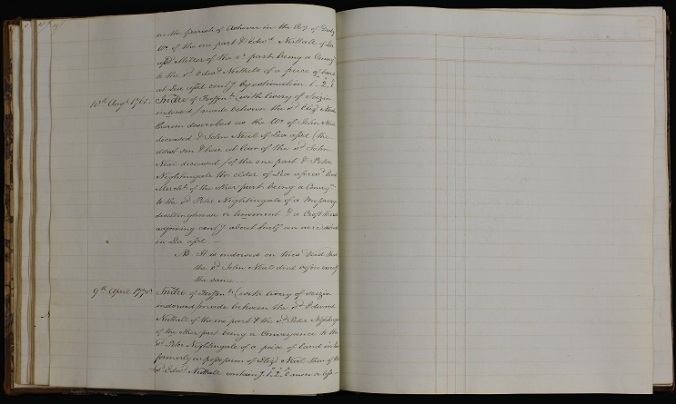 The book, held in the Derbyshire Record Office in Matlock, is a compendium of every parcel of land comprising the estate built by Peter Nightingale in the Lea / Holloway / Cromford / Matlock Bath region of the Derbyshire Dales. The estate included the cotton mill at Lea – still a going concern as John Smedley Ltd – and a lead smelting factory, as well as agricultural lands, rented cottages, and a large swathe of garden and parkland. The size and annual value of every piece of land is enumerated.

The book is embossed in gold lettering, perhaps reflecting the importance of the contents to William – it was, in effect, the key to his fortune – and the pride he took in the estate and its management.  An accompanying account book, dated 1820, shows that the annual value of the Lea estate was at least £2200 – equivalent to around £125,000 today – from land totalling over 1100 acres. In total the Nightingale inheritance gave William an annual income of around £7,000. In addition, the Nightingale land in Derbyshire turned out to contain coal deposits, which generated further income that William could invest.

The Nightingale inheritance thus allowed William and his family to lead leisured gentry lives, mixing with and entertaining the great and good of 19th century liberal Britain.

Florence’s father turned out to be a good accountant, marshalling the family fortunes sensibly and solidly over five decades. This was crucial to Florence, who never married, and thus always relied on the family income. Florence could never inherit the estate herself, since Peter Nightingale had stipulated it could only be transmitted through the male line. This left her and her family in a precarious position – if her father had died young, her immediate family would have lost control of the money and been forced into reduced circumstances.

Fortunately, however, William lived until 1874. From 1853, when Florence definitively left the family household, William allowed her an allowance of £500 per year, which gave her independence. Later in life, Florence used the money from her Derbyshire-derived income to live in Mayfair, close to the politicians she was lobbying to enact sanitary reforms.

Florence Nightingale’s letters to Crich surgeon C B N Dunn are a fascinating read, for their social history content as well as for the insights they can provide into the life of their author.  You can find out more about them in some of our previous blog posts.  In this example (D2546/ZZ/54), Nightingale tells Dunn of candidates for membership of the local Women’s Club – not a recreational club, but a benefit society, which provided a form of insurance against sickness and death.  It was hoped that Dunn could “pass” people as being in good health on joining the club. Collection D1575 (deriving from the Nightingale family’s estates) includes the rules of Lea Friendly Society dated 1832 – this society may well have been the forerunner of the Women’s Club mentioned in the letter.

END_OF_DOCUMENT_TOKEN_TO_BE_REPLACED

We hold a small but very rich series of letters from Nightingale to a surgeon named Christopher Dunn, of Crich, on a wide variety of topics. The correspondence has been mentioned in past blog posts, and we are not averse to blowing the same trumpet now – especially as the new site lets you see the whole lot and even browse their contents by subject.  Just as an example: I have looked at these letters numerous times and never noticed that there are five references to a proposed coffee shop in Whatstandwell.  Here’s how to re-trace my steps, should you wish to dip your toe in the water:

Today’s press release by the project organisers tells us there are currently 2,200 items on the database – this number continues to go up. Other contributors include the Wellcome Library and the Royal College of Nursing in the UK, and the Countway Center for the History of Medicine and the University of Illinois in the US.

On International Women’s Day (TODAY) find out about local heroines, including Florence Nightingale and Joan Waste, as well as the average Derbyshire woman in our county’s past

New online exhibition available on our website featuring original archives relating to Derbyshire’s women, and heroines, including Florence Nightingale and Joan Waste. Let us know what you think http://bit.ly/oz15DW

[2018: images from the “Thank You For Your Letter” project have been deleted to make space for new posts.  The images have been retained within Derbyshire County Council’s internal records system so that we may re-use them in the future.]