A guide to finding and using Derbyshire tithe maps and awards

Tithe maps were created for a large number of Derbyshire parishes between 1836 and 1853, and are a great resource for local, family and house historians as they are large scale maps accompanied by a schedule giving a range of information including showing who owned and occupied land and property in a particular parish at that time.

What are tithes and what is the Tithe Commutation Act?

The tithe was a tax payable to the Church of England calculated as one tenth of annual produce (i.e. crops, goods or livestock).  In 1836 the Tithe Commutation Act attempted to regularise this and commuted the levy into cash payments.  To determine what amount should be paid a tithe award and map were produced.  The total amount paid in tithes for the previous 7 years and rent charges were calculated.  The rent charge was divided among landowners according to the area and quality of the land involved.

Detailed surveys were required as each field had to be precisely measured and cultivation; the surveys were usually carried out by local surveyors with detailed instructions and supervision.  The original strict designs of the maps were relaxed by Parliament, meaning they were not standardised in scale or detail, and the surveys were carried out over a 20 year period, much longer than originally envisaged.

The scale of the maps is large, often showing individual buildings in block plan.  The best maps (first class), produced to the original proposals, were detailed and accurate enough for use to prove boundaries, however only 3% of Derbyshire maps are of this quality e.g. Duffield.  The main reason for choosing to produce a second class map was cost, as the landowners had to pay for them.  Scales vary, and some are very irregular, but often one inch to 6 chains was used.  Some of our tithe maps are also very large. Derbyshire tithe maps are considered a good record of woodland and parkland, but give poor detail of agricultural land use, only 2% of Derbyshire maps show actual crops recorded.  Field boundary ownership is not well recorded but the mapping of industrial use is, e.g.  lead, slate, smelting and paper.  Urban areas are often not mapped in detail if at all, but Turnpike roads are often distinguished.

The vast majority of Derbyshire’s tithe maps have been digitised and can be viewed on the public computers at the record office.  Alternatively, we can supply copies via email, please contact us for current costs.  Some maps can also been seen on CD at the relevant local libraries.

The accompanying schedule records owner, occupier, name, acreage and state of cultivation (e.g. arable, meadow, coppice, orchard) of each plot.  The entries in the award are arranged alphabetical by owner’s name, so it does take some time to identify the entry for the occupier or the plot number. 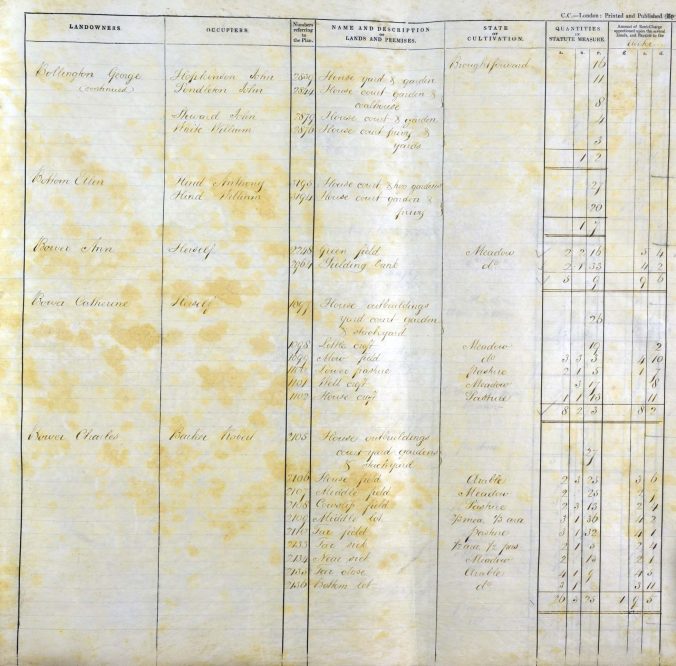 A small number of tithe awards have been digitised and are available on the record office public computers, along with a small number that have been transcribed by local volunteers.

There is a tithe map and award for each parish with land subject to tithe, with the Derbyshire records dating between 1836 and 1853.  Theoretically there are three copies of each map and award, the Parish and Diocesan copies (where they have survived) are held at the record office, with the Tithe Commissioner’s copy held at The National Archives.

This does not include any land free from tithes before the 1836 Act, so there are many places which are not be covered.  Search the online catalogue for using the words tithe map and the place name in the Any Text field.  Glebe land is also omitted and village centres may not be shown.  About 58% of the total area of Derbyshire was subject to tithes in 1836.  In some districts not all of the area was tithable.  The main reasons for exemption were modus, or small customary payments in lieu of the tithe, commutation at enclosure which replaced the tithe with an annual monetary payment, merger of tithes in the land if the owner also owned the tithe and exemption by prescription.

Uses of tithe maps and awards

Tithe maps and awards are particularly useful for village and building history, land use and field patterns, field and building names, property ownership and development.  Every dwelling and field subject to tithe is included on the map with a number that refers to the tithe award. The award records owner, occupier, description, use, acreage and sum payable.

An exhibition to discover the history of Derbyshire farms and farming, exploring the lives of local farmers from the manor to the Second World War – Harvesting Histories

The specific inspiration for this exhibition stems from a series of workshops delivered by the Record Office in June to accompany the BBC’s “Great British Story: A People’s History’, presented by Michael Wood. The workshops encouraged participants to discover the archival resources available for researching the history of farming and agriculture in their local area.

However, the inspiration for farming theme of the workshops actually stemmed from a project run by Junction Arts, Combine: Farming Heritage | East Midlands, involving young people, farmers and local communities working with museums and archives to research the history of farming in each county. Derbyshire Record Office hosted the Derbyshire group of young people in February and March 2012 and had a fantastic time working with the young people and their teachers to discover the history of Derbyshire agriculture, particularly in the Dethick area. More information about the project, which is shortly due to move in to Phase Two consisting of an extensive touring programme for displaying the work created in Phase 1, can be found at www.combinefarmingheritage.org

If you want to see any of the original material in the exhibition or other related material, it can be consulted free of charge in our search room in Matlock. Please contact us for more information on 01629 538347.

A guide to the archival resources available for researching Derbyshire agicultural history can be downloaded from our website at http://www.derbyshire.gov.uk/leisure/record_office/education/exhibition/default.asp