Next time you meet a paper conservator, just mention the words ‘self-adhesive tape’ and watch their struggle to retain some self-control.  It is the bane of our profession, the tapes used by very well-meaning people, who were trying to look after or even save important, precious documents and ended up destroying them in the process.  Two unrelated items came into the Conservation Studio yesterday, which show different ways in which self-adhesive tape has been used.

The first is a minute ‘book’ from the National Union of Mineworkers, dating from the mid nineteen eighties (D1920/1/1/39): 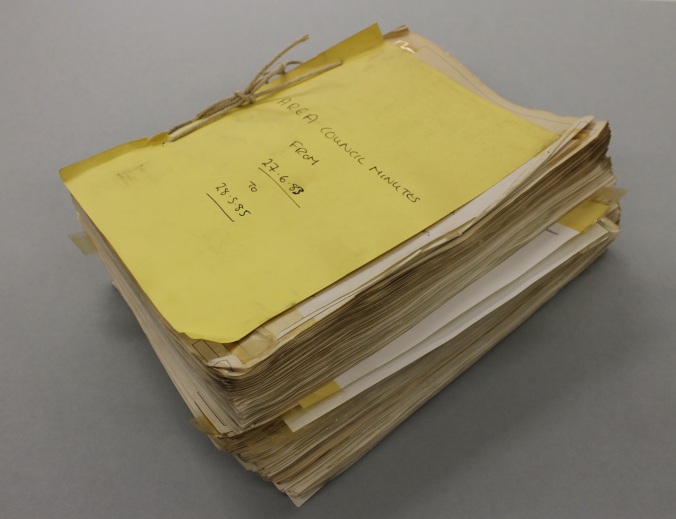 Each page consists of a backing sheet with a typed up page of minutes sellotaped to both sides of it. That’s two hundred backing sheets with four hundred pages of minutes:

In some cases the adhesive is no longer sticking to the backing sheet, leaving the minutes lying loose; in all cases it has migrated into the paper, causing significant discolouration and weakening of the paper. Removing each piece of sellotape will require a combination of heat, a sticky-stuff removing erasure and quite probably solvents, such as acetone and toluene. The problem is, you see, that in most cases the tape doesn’t come off cleanly, but leaves a little bit of sticky residue which also needs to be removed.  So that’s one thousand six hundred pieces of sellotape to remove, at a very optimistic average of five minutes each: eight thousand minutes – or about 134 hours – of work.  Obviously we can’t justify that amount of time spent on an item that can be studied in its current condition, so all we’ll be doing for now is give it some extra packaging so at least there’s no risk of pages tearing, and adding it to a list of jobs to consider in the future. 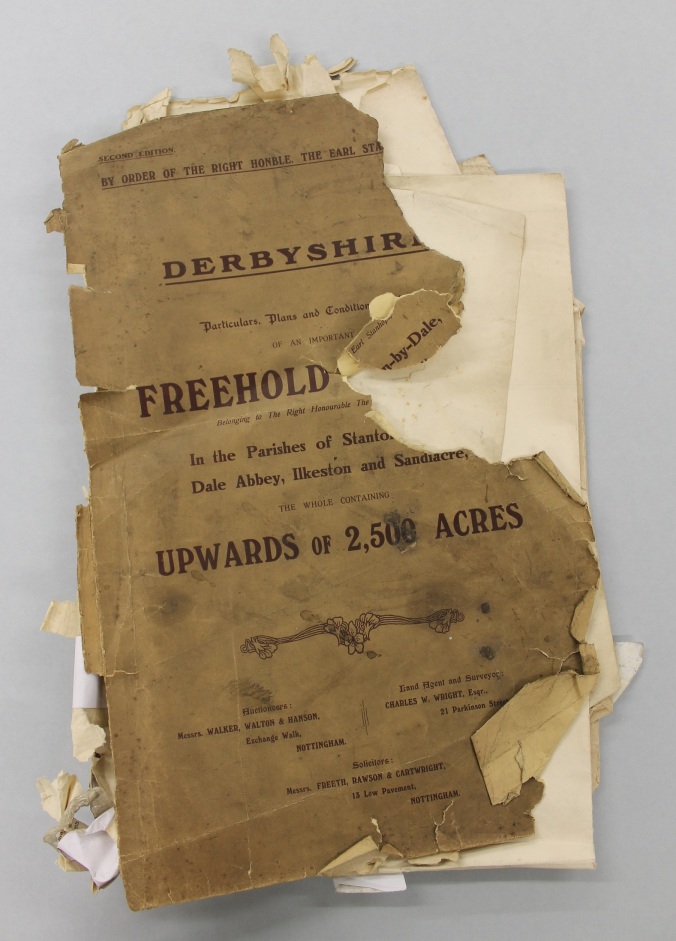 In this case the kind person trying to mend the pages has used a combination of different self-adhesive tapes, even ordinary white labels:

Clearly this item isn’t safe to be handled or looked at, so we will be conserving it in 2019 and we’ll let you know how we get on…

While in the process of cataloguing the Franklin archive, I came across two copies of a little book with the words “Sir John Franklin R.N.” on the front cover. Inside, it is entitled “A Brave Man and His Belongings; Being Some Passages in the Life of Sir John Franklin, F.R.S., K.C.H., &c, &c, First Discoverer of the North-West Passage”. The book was printed in 1874 by Samuel Taylor of Holborn, London. The text runs to 61 pages, with 5 pages of appendices comprising copies of two Valentine poems by his first wife and a brief account of the life and death of his daughter, both called Eleanor. It was compiled for, and dedicated to, Sir John Franklin’s grandchildren and great nephew and nieces. The author is not named. 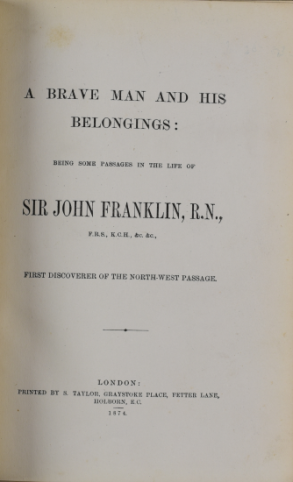 There are various copies of this book in circulation and some have been advertised for sale online. Most give the author’s name only as anonymous, but a few institutions have identified the author as a niece of the first Mrs Franklin. This is certainly true, as the author states that her aunt was Sir John’s first wife. She was Eleanor Anne Porden, who was the daughter of architect William Porden and his wife Mary. The Pordens had no less than ten children, but only two of them managed to survive into adulthood. They were Eleanor Anne and her elder sister Sarah Henrietta, who was married in 1805 to Joseph Kay, also an architect and William Porden’s assistant at the time. Joseph and Sarah are said to have had eight children of their own, two sons and six daughters.

In terms of the identity of the niece, she has been named in one source as Mary A. Kay. There certainly was a daughter called Mary Anne, born 9 February 1808, and her name does appear in the book as the recipient for one of the Valentine poems which appears in the appendix, but I think there is a much better candidate for the identity of the author, based on a passage near the end of the story. In the context of the ships H.M.S. Erebus and H.M.S. Terror setting off under Franklin’s command from England on their tragic voyage to the Arctic, the author says how well she remembers the month of May 1845, as it was also the month when she got married. She tells us that her last recollection of Sir John was two days before she got married, at a social gathering organized by Lady Franklin for intimate friends before he set sail. He took her aside and expressed his regret at not being able to attend her wedding (where his daughter, Eleanor, would be a bridesmaid), as his presence would be required on board to attend to important business connected with the ships on the same day.

This makes it extremely unlikely that it was Mary Anne Kay, as she had married Edward Nicholas Kendall, one of Sir John’s former lieutenants, in 1832. He unfortunately died in February 1845, so it is theoretically possible that she did re-marry three months later! We believe, however, that she did not in fact re-marry, as she was, according to the census of 1851, living in Kensington under her married name of Kendall with her two sons and two of her sisters. I was then able to check genealogical records and found a marriage for another of the sisters, Eliza Margaret Kay (1819-1897) who married Edward Basil Jupp at the parish church of St Giles in the Fields, Holborn, on 10 May 1845.

Although nobody could claim the book reveals anything new about Franklin and his career, it is an interesting little reminder of how he was seen by his family and relations. She wrote it for the sake of his grandchildren and his great nephews and nieces, who she says had been taught to revere his name, but that they had very little information on his character and history. She does not actually record much in the way of her own personal recollections, but she does remember when she was a very young girl and he was then married to her aunt, sitting on his knee and playing with the epaulettes on his uniform (she could not remember him ever being in anything other than his uniform). She also remembers that he looked very much like the portrait painted by Thomas Phillips and very much the same when in his 60th year as he had done in 1825-1830.The references to his character and conduct generally confirm the impression of him of a kind, affectionate, dignified and sincerely religious man, which even his critics would generally concede to be the case. 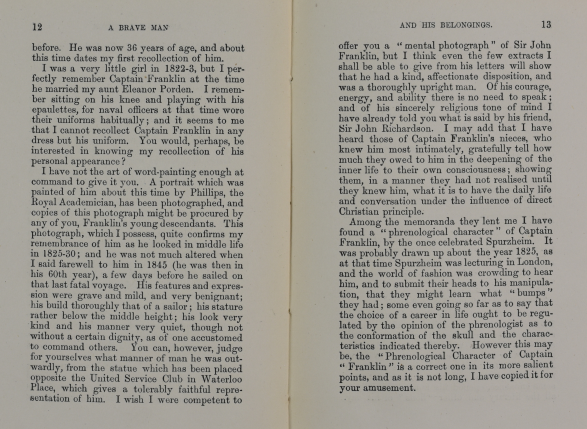 She cites as her sources on the course of his life a “short paper” written by one of Franklin’s nieces, which she claims might have been dictated by his first wife, Eleanor, outlining his career up to 1822, and a brief memoir written by his friend Sir John Richardson in the Encyclopaedia Britannica. She also had access to the papers of the Kay family, and the book is notable for the number of examples of correspondence it contains involving Franklin, his first wife, his daughter and his in-laws, the Kays. It also contains the somewhat spurious document called “the Phrenological Character of Captain Franklin”, mentioned in the extract pictured above, of which I include a copy, as she did, for your amusement.

Christmas is a time for catching up with old friends and reminiscing.  If you ever visited the White Hall Outdoor Education Centre near Buxton, cast your mind back to your experiences there as you put your feet up over the holidays…  If you have a tale to tell, 2019 is the chance for you to share that story with more than just friends and family.

Derbyshire’s White Hall Outdoor Education Centre is remarkable for being the first local authority run outdoor education centre in the country.  It’s still going strong after nearly 70 years and has just been awarded a Heritage Lottery Fund grant to celebrate its history. 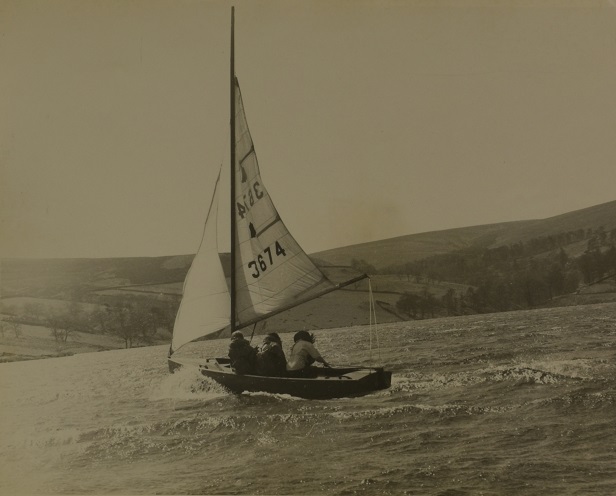 The White Hall Outdoor Education Centre – A People’s History project has just launched an appeal for people’s memories of visiting the centre over the last seven decades.  Local students will turn the stories that are collected into a film, which will form part of a display that will tour around the county.

If you have a story to share, you can let the project team know by emailing my.whitehall@derbyshire.gov.uk, and you can find out more about the project on Derbyshire County Council’s website.