This treasure dates from 1676, the year of its author’s death. You might imagine that a book on early modern surgery would be a bit gruesome.  You would be right.

It is nominated by Local Studies Librarian, Sue Peach:
“Gaze in fascinated horror at an account of medicine before the era of antibiotics and anaesthetics. No known local connection, but it gives us a glimpse of how Derbyshire folk would have been bled, purged and clystered in the seventeenth century”.

Read more about Richard Wiseman and his work on the History of Surgery website.  His entry on the Oxford Dictionary of National Biography is also very good. Find out how to access the ODNB with your Derbyshire Library card on our website.

This treasure (Q/RP/1/79) is a 1792 plan of canals around Derby, from Smithy Houses near Kilburn to the Erewash Canal at Sandiacre. It also shows the branches from Coxbench to Smalley Mill and from Derby to the Grand Trunk Canal at Swarkestone. There are dozens of canal plans and books of reference in the Quarter Sessions collection – the reason Derbyshire Record Office holds so many of them is that from 1792 onwards, anyone who planned to build a canal, turnpike road or railway had first of all to deposit plans with the Clerk of the Peace for any affected county.

If you would like to support our work by adopting this document, for yourself or as a gift, have a look at the Adopt A Piece Of History page.

Florence Nightingale’s letters to Crich surgeon C B N Dunn are a fascinating read, for their social history content as well as for the insights they can provide into the life of their author.  You can find out more about them in some of our previous blog posts.  In this example (D2546/ZZ/54), Nightingale tells Dunn of candidates for membership of the local Women’s Club – not a recreational club, but a benefit society, which provided a form of insurance against sickness and death.  It was hoped that Dunn could “pass” people as being in good health on joining the club. Collection D1575 (deriving from the Nightingale family’s estates) includes the rules of Lea Friendly Society dated 1832 – this society may well have been the forerunner of the Women’s Club mentioned in the letter. 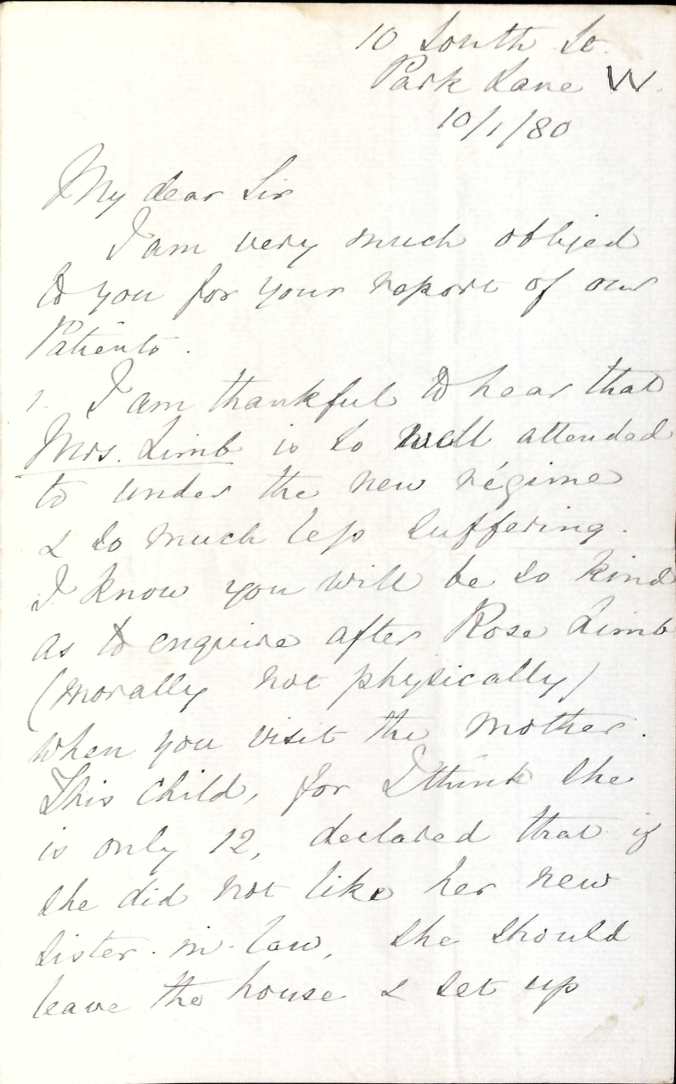 END_OF_DOCUMENT_TOKEN_TO_BE_REPLACED

Our home-based volunteer project, FindersKeepers, has finally reached its goal!  That means that our entire stock of catalogue lists is available online.  Or to put it another way, there are no remaining archive collections with catalogue lists that you can only check by looking at a paper copy in our searchroom.

Credit for this achievement is due to our volunteers: 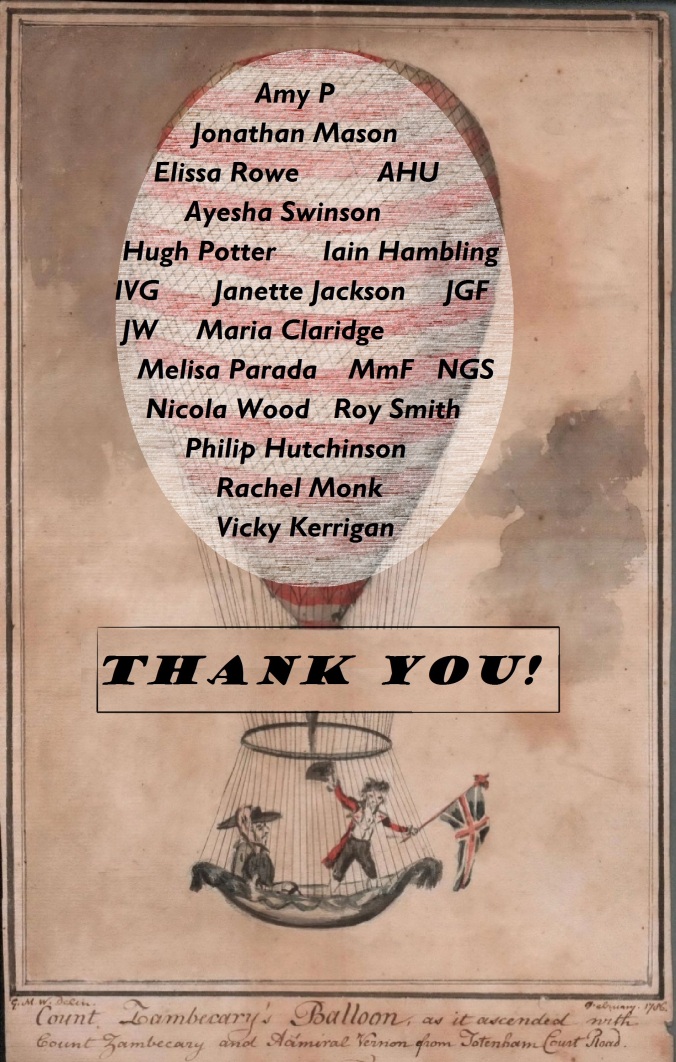 This project has added over 100,000 entries to our online catalogue, opening up Derbyshire’s history to the world.

We are already thinking about where we can go from here to make our records even easier to get at, especially when it comes to helping you work out which of our 7000 or so collections is the most likely to be useful in your research. So expect to hear about new opportunities for home-based volunteers in the new year.  Let’s call it FindersKeepers phase 2…

Completion of this project is a big deal to those of us who work here.  However, I have to admit that a lot of visitors to Derbyshire Record Office start with the assumption that the online catalogue must already be comprehensive – why else would we have it?  The reason so many people have had to invest so much effort in the catalogue just to make it match that starting expectation is because record offices were invented before computers, so we had a lot of catching up to do.  Cataloguing software was introduced to Derbyshire Record Office in 2000, and it soon began to supplement the long-established system of paper catalogues with an online version.  The trouble was, the online catalogue only contained details of new accessions as they arrived – so that, in a record office which had been busily collecting archives since the 1960s, the online version was but the tip of a substantial iceberg.  And the rest of that iceberg, to extend the metaphor, was made of paper.

The paper iceberg drifted this way and that over the succeeding years, its electronic tip growing as more materials arrived at the record office – and as The National Archives project known as a2a (Access To Archives) led to a lot of our larger lists being included.

Then Derbyshire Record Office decided to set about importing all its existing stock of lists into the online catalogue.  That meant that we needed to know which collections had already had been catalogued with a paper list, and which ones were already in our computer system.  If that doesn’t sound complicated, have a look at this flowchart, dreamed up in 2009:

The flowchart is just one of the procedural documents that our staff worked with as they gathered information about what had been done and what remained undone.  Then we made a start on the task of typing up and reformatting thousands of lists.  And I am quite certain we would not be half-way through if not for all the home-based volunteers listed above, and all the hours of work that they have put in.  (I am also certain there are names missing from that roll of honour – so please let me know if yours is one of them!)

Everyone sets tremendous value on their free time, so we really, truly appreciate the contribution of so many people to help us get to this stage.  Once again: thank you.

Since their introduction by Thomas Cromwell in 1538, parish registers have been used to record baptisms, marriages and burials across the country. They also provide a window on the past. In the case of this parish register, from the village of Eyam, it’s a window looking in on the outbreak of plague which killed 260 people in the village in the mid 1660s (D2602/A/PI/1/1). In this image, you can see how the names of the plague victims have been identified by a pointing finger. 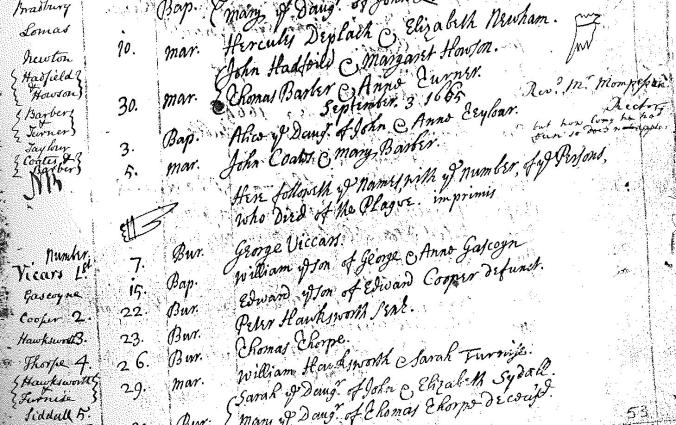 Did you know that the “pointing finger” device for highlighting key information is the earliest form of index? In fact, that’s why the index in the back of a book is named after the forefinger. It’s also the root of the word “indicate”. Isn’t etymology wonderful?

This register is unusual for another reason – the earliest entries were copied into it from an original register, by Rev Joseph Hunt, Rector at Eyam between 1683 and 1709. What happened to the original? We may never know.

A published edition of the parish register from 1630 to 1700, edited by John G. Clifford and Francine Clifford, is available from the Derbyshire Record Society.

This treasure is a poster, advertising a sporting bonanza that took place on Matlock Cricket Ground on 15 September 1894. For sixpence you could have seen the ‘amateur gentlemen’ taking part in flat races, safety bicycle races and pony races. There was even an egg and spoon race – although that does seem to have been for school children rather than ‘gentlemen’.

If you would like to support our work by adopting this document, for yourself or as a gift, have a look at the Adopt A Piece Of History page.

Join us for the launch of our new travelling exhibition about Derbyshire’s First World War, which begins its county tour at Chesterfield Library this Saturday, 10 December, 12-2pm.

Interactive history actors will be bringing to life real characters from the period and for children there will be a family trail they can follow around the library.  As a bonus, there will be refreshments including home-made trench cake!

After the launch, the exhibition and family trail will be on display in the library until the beginning of January.  It will then tour around the county throughout 2017 and 2018, so if you can’t visit Chesterfield, you should be able to see the exhibition somewhere near you.

If you can make it to the launch we’d love to see you there.  It’s free to get in and it’s a great way to see the part Derbyshire played in the First World War.

If you’re planning to surprise someone this Christmas by letting them adopt a piece of history from our collections, don’t wait too long to place your order through our Adopt a Piece of History page.  We guarantee delivery by 23 December for any order placed by Friday 16 December and for all orders from our list of Favourites placed by Thursday 22 December.

Our Favourites include our oldest document dating from 1115, a notebook with a recipe for Bakewell Pudding from 1837, the plan of the railway line to Mapperley Colliery, a letter written by Florence Nightingale, a Victorian shirt printed by Edmund Potter and many others – see the full list here.  Or choose any item from our catalogue with our Unique option to give them something more personal, such as the parish register that includes their ancestors or a logbook of the school they went to.

And of course there’s our Become a Part of Derbyshire’s History scheme, whereby you don’t only choose any item from our collections for your loved one to adopt, you also tell us the reason why.  Their name and yours, as well as the reason for the adoption, will be added to our Register of Adopters, an official Derbyshire Record Office document which will be kept as part of our archive for future generations to see. 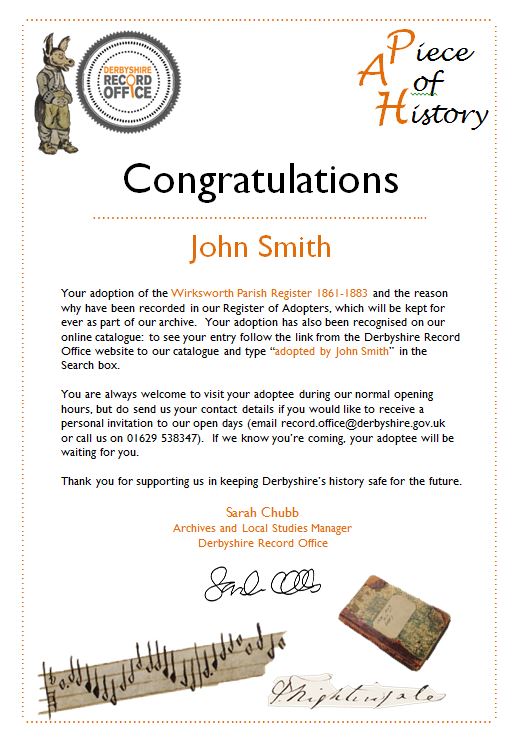 Find out all the details and how to order on the Support Us pages of our blog.

When posting one of these updates, I normally say that it’s not too late to join the FindersKeepers effort. But this time, I think it probably is! However, we are always going to need to improve the quality of our catalogue, so when devising a follow-up project I will do my level best to think of something that can powered by the energies of home-based volunteers. As ever, we owe our volunteers a huge debt of gratitude.