This treasure dates from between 1248 and 1261. It is an agreement between Abbot Walter and the canons and their parishioners in Glapwell concerning the repair of the chancel of the chapel there.  As you will see, the document is split in two.  This is so each piece could be been kept by the one of the two parties to the agreement. 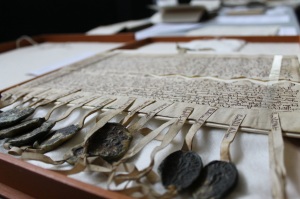 It was chosen by Karen, one of the archivists. She says: “It is a wonderful example of a chirograph. Each party received a section of the parchment, one being the counterpart of the other. Cutting the parchment in this way ensured that only the original pieces would fit together – an early practice in the detection of forgeries”.

15 lay seals were appended to one half (including the seals of a number of women), and one seal (the bishop’s seal) is appended to the other. The document is cut into with “decorative” markings on each half being lined up to prove that the other half was genuine.

The agreement comes from a large collection of deeds, of the Woolhouse and Hallowes families, relating to properties in and around Glapwell. You can read more about the collection on this page of our catalogue.