This ‘Procession Way’ plan of the Seale Estate (D77/8/10) dates from the 16th or possibly early 17th century and is from the papers of the Gresley family of Drakelow.  Centred on the area of Potter’s Wood, with Netherseale to the south, Rosliston to the north, Lullington to the west, and Seale Grange to the south-west.

It was chosen by our colleague Anne, who says “I particularly like the little houses, gates and trees – being drawn in three dimensions, they’re not just a flat image on a page.”

Among the records of the Harpur Crewe collection are a couple of Victorian scrap albums of Christmas cards collected by or for children of the family. One belonged to Richard Fynderne Harpur Crewe (called Dickie) in the 1880s and the other to his sister Frances in the 1890s.I have gathered together a number of images from these two albums (document reference numbers D2375/M/260/7 and D2375/M/246/10) to show the sort of Christmas cards they had then. They’re certainly different, perhaps unbearably so for some! Lots of cute cats and dogs and the like. 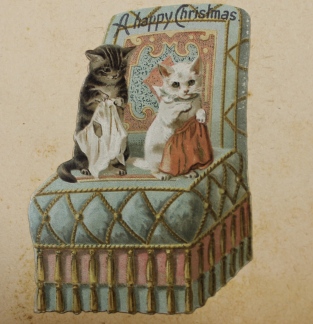 There are a couple of Santa Claus cards which stand out. I particularly like the one on the left, not only because he is pedalling away on his penny farthing but also because he has on the red  tunic usually associated with him. You often hear that the modern image of Santa was the product of advertising in the 1930s by some soft drink company or other, so it’s nice to see that it was based on something that did have an earlier tradition. 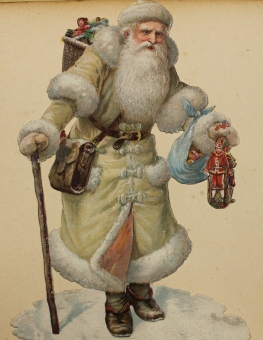 There are quite a few quirky ones.  Clowns, monkeys and soldiers feature on them more than they tend to do today. I do like the hopeful size of the girl’s stocking, but parents may disagree! Nothing, however, for me quite conjures up the true meaning of Christmas as the idea of kangaroos  prospecting for gold. 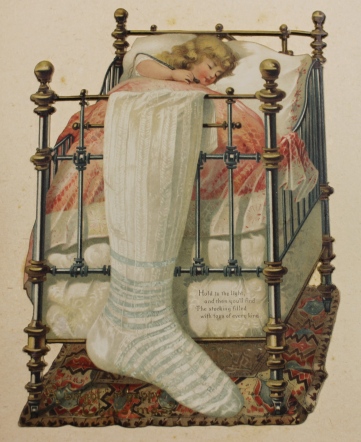 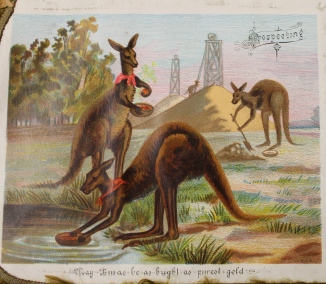 There are also a number of New Year’s greeting cards in the albums, of which these are two of the best.

Pleasley is one of the ancient parishes of Derbyshire, lying in the north-east of the county on the border with Nottinghamshire (Pleasley Hill is actually part of Nottinghamshire). It originally consisted of the townships of Pleasley, Shirebrook, and Stoney Houghton, which included the colliery villages of Upper Pleasley and New Houghton. The earliest surviving registers of baptisms, marriages and burials go back to 1553.

The register was nominated by Kate Henderson, a regular user of Derbyshire Record Office and a member of our Focus Group. Strictly speaking, the purpose of the register was to record the fact of a burial having taken place, and the name and age of the deceased – but Kate notes that this is not always all: “Occasionally a clerk will give fuller details of an unusual cause of death or of a great age achieved…

…One can appreciate the interest such a vicar had both in his parishioners but also his understanding of the interest in these people in future generations.”

The civil war of 1642 – 1653 was as close to a social revolution as Britain ever came. It granted us the gift of a Parliamentary Government and moderated Monarchy that we still enjoy today. Indeed, the brief Republic of Oliver Cromwell was revolutionary, happening years before the famous French and Russian revolutions. For many historians, what happened in Britain is far more interesting, more a case of evolution of a tired and tested system of government; than a total revolution of leadership. This is clear, as following the restoration of Charles II in May 1660, early modern Britain, constitutionally at least, remains recognisable to British politicians today. END_OF_DOCUMENT_TOKEN_TO_BE_REPLACED

Thanks to everyone who made the first lead industry seminar go so well last month.  I found it invigorating to encounter so much enthusiasm, experience and subject knowledge.  Much of the session was devoted to introductions and admin, but we took the opportunity to hear from Lien and Clare about the Mining the Archives project, which is facilitating conservation work on some of the lead-mining records we hold.

The next session is on Friday the 13th of February 2015.  (Yes, I know.  Bring your own horse-shoe or rabbit’s foot and don’t pass under any ladders on the way here.)  The seminar will be divided into two discussions:

We had a diverse array of talents at the last seminar, some of whom had only very recently developed an interest in the history of the lead industry, and others for whom it has been a lifelong obsession.  I have reserved places for everyone who was there to come back in February; but there are other places available if you have anything to contribute to the conversation, however minor – you certainly don’t need to be the world’s authority on lead.  You can book by calling 01629 538347.

The first thing you normally do when you take a volume apart is to number all the pages in pencil, so you know exactly how everything fits together.  However, in this case, there were two issues preventing me from doing that: turning over the pages to number them risked destroying some of the damaged areas and at some point someone else had gone through the volume and numbered it in pencil in the top right corner of each page.  Great, you might think: just use the existing numbering and go ahead! Unfortunately, relying on someone else’s numbering is never a good idea, as they may have made mistakes and they may not have numbered all the pages you need to be numbered before taking a volume apart.  All volumes (whether they are hand-written manuscript volumes or printed books) are bound with endleaves at the front and the back.  The first and last page of these blank sheets are stuck to the boards and help hold the binding together – no one ever counts these endleaves when counting the number of pages of a book and equally no one ever numbers these.  Except for conservators, who need to know exactly how each page relates to every other page.  In this case, as you can see, the front endleaf has become detached from the board, showing more details of the binding, whereas the back endleaf is still in place and has been written on.

Front endleaf and exposed front board

Back endleaf still attached to back board

To avoid confusion and prevent further damage I have decided not to add any additional numbering, but to number the endleaves with roman numerals as I take the volume apart and hope the old numbering will be reasonably accurate.  As always when taking a volume apart I will be keeping detailed notes of how all the pages fit together, so if there are issues with the old numbering I can keep a record of those and still fit everything back together as it should be.

Among the Harpur Crewe records are a number of 18th century account books of the stewards or agents who were acting on behalf of the Harpur family, and these have lots of interesting entries which show a little light on how the elite spent their money at that time. END_OF_DOCUMENT_TOKEN_TO_BE_REPLACED

Local historian Keith Taylor has published his latest book: Buxton Remembered during the Great War. Covering Buxton and surrounding villages, it gives a vivid insight into the lives of families devastated by the conflict, with biographies of each of the fallen and a wealth of background detail.

This treasure is part of the Derbyshire Constabulary collection (the full list for the collection can be downloaded from our catalogue). It shows photographs of people who had been apprehended by the police, taken shortly after their arrest. The photographs alone contain masses of social history. The volume was chosen as a treasure by Elissa, a longstanding volunteer here at Derbyshire Record Office. She remarks: ‘I particularly like the fact that it’s the same police officer who keeps appearing in the criminal portraits!’

The volume of criminal portraits (D3376/OS/7/1), chosen by our volunteer Elissa

The Derbyshire Constabulary was formed on 17 March 1857 END_OF_DOCUMENT_TOKEN_TO_BE_REPLACED

One of my projects this week has been repairing the parliamentary enclosure plan of Doveridge, from 1791 (Q/RI 36) which was in a rather sorry state. The map had originally been flat, but then subsequently folded up, which had eventually caused it to split in two. It had then been rolled up for storage, causing even more damage and splitting along the folds.