“While on Work Experience at the Derbyshire Record Office I have worked in a large variety of areas. These varied from the Conservation of Documents to helping to create the Offices new digital catalogue through the FindersKeepers project. I was astonished at the breath of what is done there and was surprised when I was even able to further improve my IT skills by helping them advance their wikipedia page and got to be involved in the digitisation of photographs through Picture the Past. The Office and Local Studies Library contains a vast number of treasures of which I had the opportunity to explore just a handful. One of these that I found every interesting where the letters and leaflets written by David Pole who was a Labour MP for South Derbyshire from 1929 to 1931. His political career had started in 1918 and he had written over many issues that are now some of the most studied events in history such as the Treaty of Versailles and the Rise of Hitler and Fascism.  Another archive document I found especially intriguing as we approach the centenary of the First World War was an enlistment paper from  1914 which was using the example of the German invasion of Belgium to persuade British men to sign up for the war effort.  It also had a punch cartoon depicting the German Kaiser and Belgium. Another opportunity I had while doing a Work Experiance at the Record Office was to be able to research my family tree and trace back seven generations on one side. However I am not completely convinced that I found the right line of ancestors, though either way the skills I learnt through the process have helped develop my ability to research. On top of all this I got the chance to meet and explore the roles of over two dozen people who work there. Through my time there I got to catch a small glimpse into what they do, and be welcomed into their family. As I finish my time in the Record Office I will leave with a greater understanding of history, politics (through the archives I read), and an amazing acknowledgement of the work that goes on behing there doors to keep our joint history preserved and studied for many future generations. There are a vast array of skills that can be taken from doing a work experience at the Record Office and Local Studies Libary and I recommend it to any one who has a passion for history or wants to develop there research skills”

We would like to thank Philip for the great work he has done whilst at the Record Office this week, it has been a pleasure having him here and we hope to see him again soon.

In my last post about catalogues, I suggested we might be looking at mid-February for the completion of an upgrade on our catalogue browser. And, OK, it’s the last day of February, but we are there.

One of the benefits of the new browser (Calmview) is that it allows us to upload images and attach them to catalogue entries. At the time of posting, we have only 5, but there will be more. Our trial of this function begins with images relating to World War I. That hyperlink will take you to an up-to-date overview of catalogue entries that have associated images, so if you click the same thing in a few days’ time, you should see more there. To view an image, just click on the particular entry.

I hope the idea of using hyperlinks is one we can work with more. For instance, in response to a specific request I can add a link here to the Froggatt of Froggatt collection, D3331.

Another useful thing is that we can add documents, which means we can post wordprocessed versions of lists that we haven’t added to the catalogue yet. A random example is D5262, a collection of Monyash title deeds.

Further posts on this kind of caper will follow. Thanks.

Just recently, I received a specific request to locate a particular series of late 17th century documents for Elvaston manor on behalf of a researcher, Mr Jean-Baptiste Piggin, who had tried unsuccessfully in the past to locate them. He had found the reference to the documents in “Three Centuries of Derbyshire Annals”, Volume 2 (published 1890) by Reverend J.C.Cox. Cox states (page 275) that they were stored in the “record room” maintained by the Clerk of the Peace in St Mary’s Gate, Derby. This meant that they were held along with the records of the Derbyshire County Quarter Sessions, which were later moved to the County Offices in Matlock in the late 1950 and then eventually transferred to the Derbyshire Record Office in Matlock in the late 1980s.

It was assumed that the Elvaston manor items had been lost. There was no indication in the assorted lists and finding aids drawn up over the years for the Quarter Sessions that they still existed, and there is, indeed, no reason for them to have necessarily been retained, as they had absolutely no connection with Quarter Sessions. There are, however, quite a number of boxes of Quarter Sessions still unlisted, so I decided it would be worth checking in each one. And so it proved, even though, as is the way of these things, they were in the last box I looked at! The documents (numbering 60 items) have now been removed from the Quarter Session records and allocated a new collection reference number, D7687.

Mr Piggin has produced an excellent blog on this episode, which can be seen at http://macrotypography.blogspot.de/2014/02/lost-leet-records-rediscovered.html.

The equally excellent page on his website about Elvaston court leet can also be seen at http://www.piggin.org/leet.htm. He has transcribed everything that Cox published on the subject on pages 275-280.

One of the most intriguing aspects of the documents themselves is the way it shows the Elvaston jurors being able to fine the lord of the manor, John Stanhope, and members of his family for their minor misdemeanours. Lords were not above the law, so to speak, even in their own manors and had to abide by the “custom” or the by-laws of the manor the same as everyone else .

The top presentment by the jury members serving for Ambaston on 13 April 1692 fines Mr. John Stanhope 10 shillings for not scouring his watercourse. Notice that his fine is much higher than those for the other listed people for the same sort of offence. You can’t help feeling it’s pay-back time for the lord and master!

The manor court jury was expected to investigate incidents of potential misdemeanours and then present their findings to the court. These investigations would have taken place before the court actually sat, making the manor jury a very different beast from any present-day jury. There was also an implicit assumption of guilt for those named by the jury in their presentments: the matter had already been investigated, and if the person hadn’t committed an offence, he wouldn’t have been presented! You do find cases where people have appealed, in effect, against the “false words” of the jury, but these are very much the exception.

Regarding my last post – well, it seems Fridays bring questions and Mondays bring answers. Lisa has pointed out to me that you can see details of the images on Peakland Heritage by hovering the mouse over the little preview. D’oh! Still, that gives us an opportunity to give credit where it is due – specifically, it is due to James Walker Tucker (1898–1972). The original hangs at the Laing Art Gallery in Tyne and Wear. Full details can be seen on the BBC Your Paintings website.

It’s a very handy website for this kind of caper. You can search by gallery as well as by artist. I have checked the Derbyshire Record Office entry, and find that we have one solitary image to our credit: http://www.bbc.co.uk/arts/yourpaintings/galleries/locations/derbyshire-record-office-3153 . It would be more if George Woodward’s cartoons and John R. Biggs‘ woodcuts counted as paintings, perhaps? Of course, within Derbyshire County Council, works of art are properly the bailiwick of Buxton Museum and Art Gallery, who are credited with stacks of them: http://www.bbc.co.uk/arts/yourpaintings/galleries/locations/buxton-museum-art-gallery-3501

Hullo. This post concerns 2 quite unrelated things – poor netiquette, but I understand these things are tolerated on Fridays.

Thing 1: Does anyone know the source of this image on the Peakland Heritage website? http://www.peaklandheritage.org.uk/gallery/Hiking.jpg We have a researcher who is very eager to have a high-resolution copy, but to oblige we would need to know where we found it in the first place, a decade or so ago. Any ideas gratefully received.

Thing 2: I have nearly finished putting together our annual return of archive accessions, to send to the National Register of Archives (http://www.nationalarchives.gov.uk/nra/default.asp). We took 207 accessions last year, in 278 working days (counting Saturdays as half-days and not making allowance for the fact that we were closed to the public until mid-February 2013). That means that, on any given day, we have a 75% chance of taking in a new accession. If you are among those kind and heroic souls who help to preserve the county’s heritage for future generations by letting us have your old documents, please know this: you can make our service run far, far more efficiently by giving us a bit of warning. Booking an appointment to donate things a day or two in advance is usually fine. If we can advise you about times you might want to avoid because we know we will be busy and therefore keep you waiting, this will be better for you. If we can prevent the arrival of new records clashing with, say, the visit of a school group, staff absences, an outreach event, or our favourite removal firm arriving with lorry loads of material coming back from outstores (just to take examples from the past month), life will be a lot easier for us. Plus, if you make arrangements in advance, we can put your details in our depositor database beforehand, which will mean modestly less time spent on paperwork when you get here. I thank you.

Exactly one year ago today we opened our newly combined Local Studies and Archive service in our refurbished home in New Street. Thank you to all our customers for their patience and enthusiasm during the past twelve months – we hope you’ve enjoyed your new Derbyshire Record Office experience as much as we’ve enjoyed seeing you.

Packing up the old archive Searchroom

Getting the new Searchroom ready 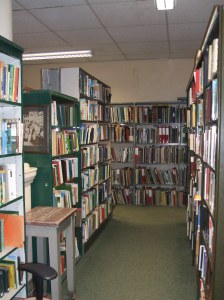 The Local Studies Library then… 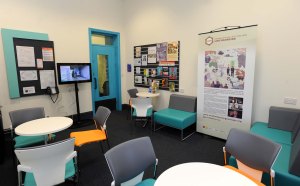 Even a place to relax with a cup of tea

Have you ever wondered what an archivist actually does? Then join archivist Mark Smith as he tells all about the fascinating and varied work in the daily life of the record office archivists. 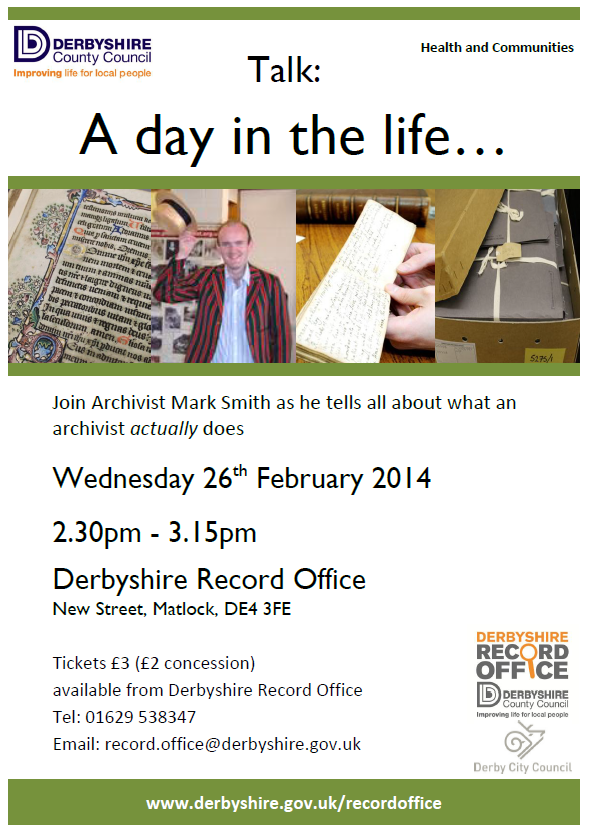 This Saturday, the 8th of February, is National Libraries Day – an opportunity to celebrate libraries and library services across the UK.

Visitors to the Record Office will have seen the exhibition in our reception –  ‘I Didn’t Know You’d Got That!’ – showcasing the range of material held in the County Local Studies Library collections.  From sale catalogues to stereo cards, periodicals to postcards, the display will be available to view until 8th March.

There are also talks and workshops happening in libraries around Derbyshire – see the ‘National Libraries Day Events’ listing available here for more information.